“There is no greater agony than bearing an untold story inside you.” --Maya Angelou

I know I should use Twitter for all the tweeting I do..but that utility is just dangerous for my short fuse nowadays. Can you just see me twittering about some small stupid bs that infuriates me and making myself look like more of a clinically insane bigotted psycho feminist?? Can you see that? Becuz I sure can. I swear these services are in part for all of us to spy on EACH OTHER and judge each other's every f*ckin word. I love the idea of Twitter..but even I, rumoured to be the world's biggest narcicist without having any talent, family money or smarts to back that up, don't even think I need to be heard that frequently throughout the day. Its just too much degrading of the fabric of our culture..or the one I am holding onto from the 20th century anyway. When Warhol's hell didn't yet replace real art and theater. Its sad really...at least Warhol degraded classical artwork with truly interesting trashy people..whereas today there are no interesting trashy people. Just rich white and black trash who are horribly un-interesting, all trying to be Lord so and so's level of status in society. BOOORRIIINNG. Remember back in Warhol times, lord or Lady so and so actually DID get down with trashy people? And everyone looked fabulous doing it too. Destroying themselves.

That's becuz there wasn't this totally bizarre backdrop of false morality or militant political correctness putting stress on every scene created. You simply didn't exist if you were uncool or uninteresting.
Where as nowadays the common and uninteresting is showcased in reality shows or 'talent' competitions, where, ironically formerly astonishingly talented rock and roll lead singers have stooped to judging the uninteresting, boring, marginally talented commoners for mass consumption: mind control anyone?

Dontcha love our down the rabbit hole reality?

Now to publish this so Sheen can pretend he's been to hell and back like I have, when in reality he just smokes alot of crack and wishes he had my t and a. Its alot different BEING an actual goddess (who sadly is destroyed and subjugated) than it is keeping them round the house as pets. Love the clips of Jaws..kinda like my posts years ago. The difference is he does it for a stage show..I did it to stay alive and describe actual feelings. So all you morons out there who keep sending me comments about how Sheen stole my act or whatever. Forget it.

Do you realize how many talented cult or obscure shows or acts out there have been literally plagerized by Hollywood types? Its what they DO. No group of people, no matter how talented, could produce the amount of work that Hollywood writers do. They regularly steal from real life stories or lift people's creative writing or shows. I posted years ago that the man who was involved in the game show hoaxes of the 50's was being coveted by Hollywood to tell his story and consult I believe for the movie about that subject. He brought the contract to a lawyer and was told he was getting screwed so didnt sign. All the while he noted very gang stalking like activity around him, being spied on, watched, strange cars, people engaging him collecting information.

Wake up. Hollywood works for the CIA and Mossad. Or at least the CIA is documented to consult on movies anyway..what Hollywood puts out is very very important to shaping the minds of the nation. In war time and in peace. You are really surprised that Sheen stole my act? That a-hole has been involved in Two and a Half Men, which is a personal psy ops nightmare for me personally and also was alluded to by a black man close to the bloods as being just as I suspected it was: part of the mind f*ck on me. That very same man after revealing that information died under mysterious circumstances, with a woman from his past he hadnt seen for years showing up with certain drugs he usually did not take. Needles were found outside the window, and they didnt use needles so someone had placed them there. After he was MURDERED, perps were messing with me for a week or so, in directed conversation, trying to intimate that 'hey, if you murdered someone or it looks like you were involved in an overdose, just turn yourself into the police- the judge will understand'. I was a continuance of the totally retarded efforts to induce false confession that had gone on years before as well in Boston.
Its rumored the cops did the same thing to that kid who for some reason, was convinced he was a suspect in the nanny killing in Fenway. The police said he wasnt a suspect but somehow being convinced he was, he committed suicide. When I pressed this person further who was telling me about this story I had read but in more general terms all he said was this: "you know. Cops. They think they're the sh*t". Yes yes, I do believe I have experienced that over years of this ordeal. Sadly, its a bit harder to fool someone who is not only programmed to not fall so easily, but also..as our bitch friend from WLP put it: I have 'friends'.

My point being that Ive seen enough and had enough hinting to know that tv show was written to piss off TI's. I was told its probably not just me that was mind f*cked by it but other TI's as well.

I did my research. You should SEE the writers of this bs. Hysterical. Wait till you see what these guys look like.

Firstly there is the main writer who spent time as a musician, and a song writer, I believe connected to the NY scene. Which means we are again dealing with the northeast and also Jake's new industry scum buddies.
Also this man only got his first awards for Two and A Half his whole career and he received his awards just at the same time my ex who sold me out Jake was receiving his awards for an equally bad piece of low budget shit titled By Any Means Necessary or Grace- both by he and another rich kid (who I was recently told has parents that are powerful psychologists in academia locally!)and both very undeserving of the attention lavished on them. But that is what this system is about. Favors for dirty deeds.

The other writers for Two And A Half Men are just as pathetic looking. Who else would hate an attractive Goyim more than these misogynistic, old school scum bags?

Lets look at how strikingly unattractive these men really are. Get ready to puke, then laugh..then get sick again. It makes Phil Spector with his Jew fro look like a sex god...heeeeerrrre we go!

(I was looking over pics of Phil Spector in court. I was going to use this pic for fun: 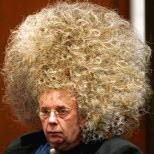 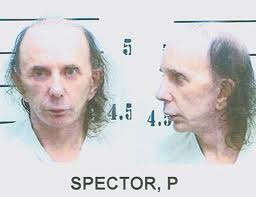 Its not funny anymore. Within this photo I see a demon that could overtake any of us and destroy us-I can deal with that. What I can't deal with is people like the 'winners' who destroyed me when all I wanted to do was good and they seem to be able to hide thier nasty sides from the world. Those are the most hated and reviled by me. Most of the seeming 'winners' on these levels are total bastards who's sickness in society is manageable..unlike poor Phil who seems to contain within him a pure spirit of evil and torment. Lets not make fun of him again shall we? Lets make fun of the people who think they are fooling everybody with thier great fronts and always get away scott free..and are handed awards at painfully obvious opportune moments in life. They arent Awards, they are REwards). Im going to have to leave the country after this arent I? GOOoooood. Then Ill miss out on Romney's rain of terror. Sheesh, and we just got rid of Oprah..cant we be idiot free for just one decade?! AAUUURRRRGGGGHGH!

Of all the pics of Lorre he is hardly ever unattractive. But I know this kind of older male. He is terribly smug and vain and full of sh*t usually..attractive? Suuurrrre. Deadly? Yes.Probably.
In all his pics he seems to think he's as suave as an Italian. But alas, his ancestry most likely ends in a -ski or -witz opposed to any other vowel combo. Sorry dude: 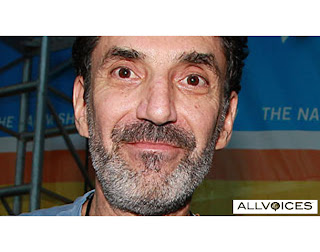 Here is a portrait: 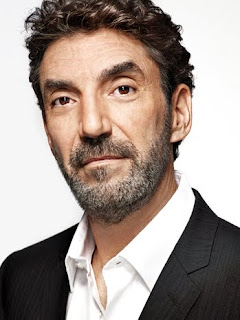 Vain, smug and superior. Just what you'd expect talent to look like. But it seems in this world, only males like Lorre are allowed to be this stunning of a creature. Women like me only get punished for daring to be this self confident or overt about possessing talent. Oh and Im not Jewish or in with the mob. Too bad for me then.

Now lets move onto the next jerk, who's a writer and also producer of the psy ops nightmare Two and a Half Inches...I mean Men. Uh..yeah.

Lee Aronsohn:
Let the pic speak for itself: 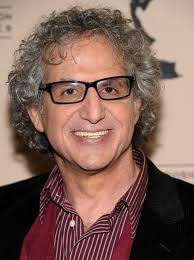 Uhh, point made and taken I think. Really not a handsome one is he? And certainly cant be mistaken for a Latin at all...seriously. I love the very unhappy facey wacey at the top. Didnt get his way I assume..or the monitor was close enough for him to see his own reflection clearly. Perhaps thats what set his mood.

Ahh, there couldnt be a nicer smug bunch of *ssholes than these guys!
http://www.zimbio.com/photos/Chuck+Lorre/Lee+Aronsohn.

I am sure out of this post I am going to get alot of bs in response like 'Its sad isnt it' and me being delusional.

Did you think I was some old f*ck Hollywood wife you could just get rid of, broken and tapped out with only my plastic surgery to comfort me in old age? Or some rock and roll girlfriend that kills herself and gee, no one knows why to get her out of the way.

You got the wrong motherf*ckin girl you blithering idiots. You keep it up then.

Becuz these guys look like Julie's client types..in fact I may just have compartmentalized memories of the handsome one.. hmm. Upon looking at him, I could SWEAR I know him from somewhere..hmm. Maybe that hypnotist I was terrorized away from during Bush could reveal more.

You keep it the f*ck up, every perp, every cop every idiot in the street who thinks they know the story. And I will just keep doing what I do. I dont deal in deceptions..I deal in facts, truth and life experience.

GO TO HELL...or in your language DROP DEAD.

Oh and here is a pic of Sheen you may never have seen: 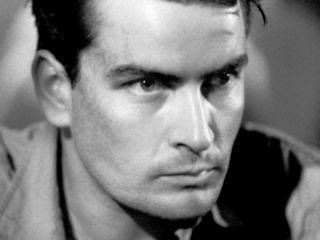 COS anyone? Its not even hot its just scary.

Oh if you think this is cool, look at what its been reduced to: 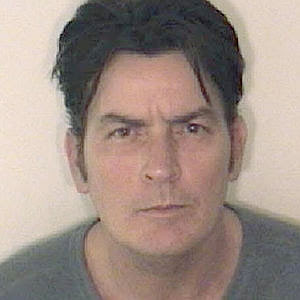 At this point I have lost all sympathy for him possibly being targeted for speaking out about 9-11. Get over yer dad being a jerk or whatever or mom being a c*nt..whatever the deal is..sheesh.

I can only hope in my most positive moments that he's so targeted for that, he stole my schtick becuz it works as a TI. But its not like he needs the money why would he have to do that? No, hes too sexist NOT to be suspect. And he whores too much. Sounds like he owes people favors..

But remember. I am the crazy one whos imagining all this and Charlie, well: 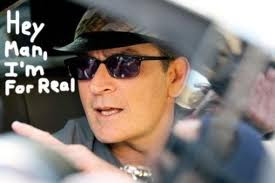 Good night everyone. And death to my enemies and alllllllll thier friends. F*ck You ALL.
Posted by On_GangStalking at 6:37:00 PM