“There is no greater agony than bearing an untold story inside you.” --Maya Angelou

Just a cool book I found. Made me personally feel a bit better about my gang stalking situation.
Wall and Piece by Bansky. Cant show you photos of artwork as he has taken ownership of his work even though its kind of counter to what he's 'supposed' to be about. But I cant blame any creator, if its good enough, to not take credit for thier work.
Graffiti art, political in nature. I really enjoyed it.

"He didn't sell out, he bought in.
He isn't as bad as Sheperd Fairey 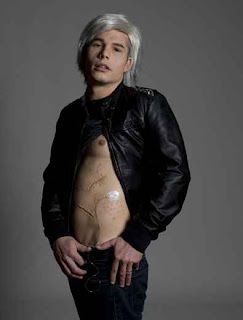 ... but that is another conversation in itself."

This is that kid that made that annoying poster that covered a whole wall near Pine St Inn homeless shelter when I was staying down there last year or the year before. It had some elements in it that just went a bit too far. MYOB boy! We shall see just who is capable of 'any means necessary'..the rich kids who gain those means easily or the poor girl who is just as talented as your sorry ass but not as..'lucky'. (Hmph- whatever). When its about survival I would say that the hunted are executing any means necessary- not some fat kid who survived in his mother's attic for years barely escaping permanent sleep via obesity, pills and Tequila. Until a person arrived that when he got bored and also when the shit hit the fan, was a convenient scape goat.
MK Ultra is 'any means necessary', not some rich kid drug dealer who makes a nice move on a chess board.
A month ago I had been sleeping in Harvard Sq and bleary eyed from my health predicament as well as burnt out from traveling I barely was conshus of a remnants of one of his posters above where the kids and a homebum sleeps, which when there was no room was right above my head then. Someone pointed out that it had been painted over..I didnt notice really. I wonder who did that..someone with some sense of taste and decency or a still egotistical spoiled connected kid who believes that keeping other talented people down is going to make his career bloom. Stand in line with Jake kid, cuz there are plenty of marginally talented one trick ponies with rich parents or quiet connections who need to step on (especially female) talent to keep the status quo running. And that is all someone like this is doing. The days of Andre the Giant having a posse stuck onto gas pumps around RISD are over. That era of freedom and true surrealistic type reconscruction of reality to destroy the illusions of a consumer culture are gone gone gone. You'd probably be labeled a terrorist now. Bush killed what was left of Gen X. Fairy ensures that anything legit as far as rebellion is now part of the system that is the problem to begin with.

"Change"...how about "brainwash?" or "Cult of personality". It no longer matters who is in office- the outcome is GOING to be the same.

I cant blame Bansky for wanting to stick it to those types for as much money as possible- I know what he is doing, but you have to understand that a poor talented person is angry to begin with due to the fact that he doesnt see success like is available to rich kids in his future. EVERY artist wants to be noticed, respected, appreciated and yes, horribly famous. I can just appreciate what he left us in prior years and hope he doesnt get any more commercial. The selling of t-shirts with his stuff on it is probably the worst part of it and the Paris Hilton dig was cheap. But could any of us after so much poverty and sneaking around having to remain anonymous handle the glow of the spotlight or being able to finally make bank off of our work. Its very tempting especially when one gets older its naturaly to start hearing the ticking of the clock a bit louder than in one's 20's.
Do what you do with the dead- remember him as he was..if it bothers you so how he IS.

Here is something else annoying if yer interested:
http://www.kpbs.org/news/2010/aug/06/shepard-faireys-obey-mural-hillcrest-gets-tagged-p/
The original artist is also "looking for attention" or he wouldnt have become famous.
And what is a reactionary artist if he isnt feeding off the host known as legitimate or mainstream culture? Also, I lived in SD for like 6 mths outside mostly. You have no idea of the gang activity there, drug running out of Mexico and the jail mentality. They prob destroyed it to make thier own statement- dont come into our city with your bullsh*t. Hillcrest is a very gay friendly community so its like the only place in SD that has any resemblance to the south end or SoHo but its still kept very in stride with a city that claims to be broke but has vast concentrations of corporate and private wealth. The rest of SD is full of white people who are totally segregated from anyone poor and have a culture rating of zero when it comes to intellectualism from an old money mentality like anything Brahmin here http://en.wikipedia.org/wiki/Boston_Brahmin.

The statement is exactly what I would expect from SD: we dont respect you for sh*t kid, or you aint from So Cal, OR I want to be more famous than you- like in jail going after the latest celebrity inmate. It aint Cambridge out there that is for sure.
What is this author an FBI agent? You're profiling artists psychologically now? 'No statement was made and it looks like it was for attention' oohhhhh noooooo. And the pic of the sneaker print completes the CSI-esque scene that it was a crime that went down here today!!!! A CRIME!!!!!!!!!!!!!!!!! I love how certain factions believe that they get to claim what is truly legit and what is not.

People are sick of fake leftist YUPpie scum covering for a faction that seeks to destroy any real revolutionary fight left in this country.
And by the way SoCal is very conservative in its way. No one there has the patience for his drama queen, luxuriate in fantasies of revolution nonsense. There are too many problems at the border, too much overflow violence, extreme classism, earth quake aftershocks and its too damn hot during the day to do anything but stay stoned with your med marijuana card. His work forces them to think which everyone in SoCal finds offensive anyway. Politics could be very dangerous to a place like SD which withOUT the beach and lots of pot and good weather is a classist, racist, gangland disaster area waiting to happen.

Thank you SD for this public service. I think I will frame the sneaker print as my new favorite piece of street art.